Our Heads of School 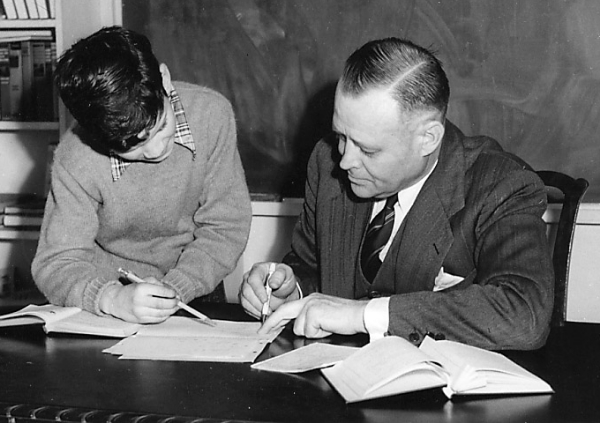 When Country Day opened its doors in September 1941, the school was led by Dr. Thomas C. Burton, our first headmaster who had a visionary new concept in education—the independent school.

Here's a list of our other Heads of School who also looked forward and led the way in education:

Thomas C. Burton (1941–45)
Considered an original and progressive educator by his peers, Dr. Burton believed passionately in the value of independent day schools, which he said, “combine the advantages of an excellent public school with those of the superior boarding school.”

Nar Warren Taylor (1945–48)
Headmistress of the 56-student school. Ms. Taylor is remembered as an exemplary educator, but a tough disciplinarian, even thumping students behind their ears for infractions!

Thomas Stapleton (1948–50)
Serves as headmaster for two years and is known for bringing in distinguished faculty member such as Robert Booker and Emlyn Evans, who established the Halloween Parade.

Robert Booker (1950–1955)
The school is still small enough that Mr. Booker knows every student and has a pet name for each one. In the 1951 yearbook, he states his goal of impressing each student with the value of “good manners, good moral, good learning, and good sportsmanship.”

David Howe (1955–1969)
Mr. Howe makes a quick and positive impression on students, who dedicate the 1956 yearbook to him for “his wonderful character and undying patience as a person, teachers, and headmaster.” During his tenure he increased the operating budget from $116,000 in 1955 to $650,000 in 1969. He is credited for transforming the school with a regional reputation for curricular and teaching excellence. The Halloween Parade, Holiday Breakfast, and Big Saturday all began under his leadership, as well as the first graduating class.

Emerson Johnson (1969–1973)
Dr. Johnson is remembered for funding foreign travel for faculty and working diligently on raising funds for the Program of Progress capital campaign and overseeing construction projects.

Horton Reed (1978–1986)
Mr. Reed begins his tenure as headmaster, joining Country Day with more than 15 years of experience at independent schools around the country. He was credited as a driving force behind the merger with Carmel Academy, which propelled Country Day forward into a new era. He was a risk-taker and a visionary and implement new programs that are still in place today.

Margaret Gragg (1992–2009)
Ms. Gragg serves as the longest tenured and most influential head of school. She held a 33-year career at Country Day, 17 as Head of School. During her time, the school experienced remarkable growth and stability. Under her leadership, the school raised nearly $43 million in capital, endowment, and annual funds; renovated nine facilities; built over 134,000 square feet of new construction; and strengthened our academic and athletic programs.

Mark Reed (2009–2021)
Mr. Reed joins Country Day as our 11th Head of School. Significant outcomes stemming from his leadership include $92.5 million raised over five years in the largest comprehensive capital campaign in the school's history; the transformation of Cannon Campus including the addition of 72,000 square feet of educational space for the construction of five new buildings and other campus improvements; and significant diversity, equity, and inclusion programming. Mr. Reed advanced educational technology, enhanced campus safety, developed a multiyear Strategic Plan, increased endowment to more than $50 million, and developed programs and events such as the Annual Community Art Exhibit, the Parent Speaker Series, Senior Externship Program and All-School Convocation.